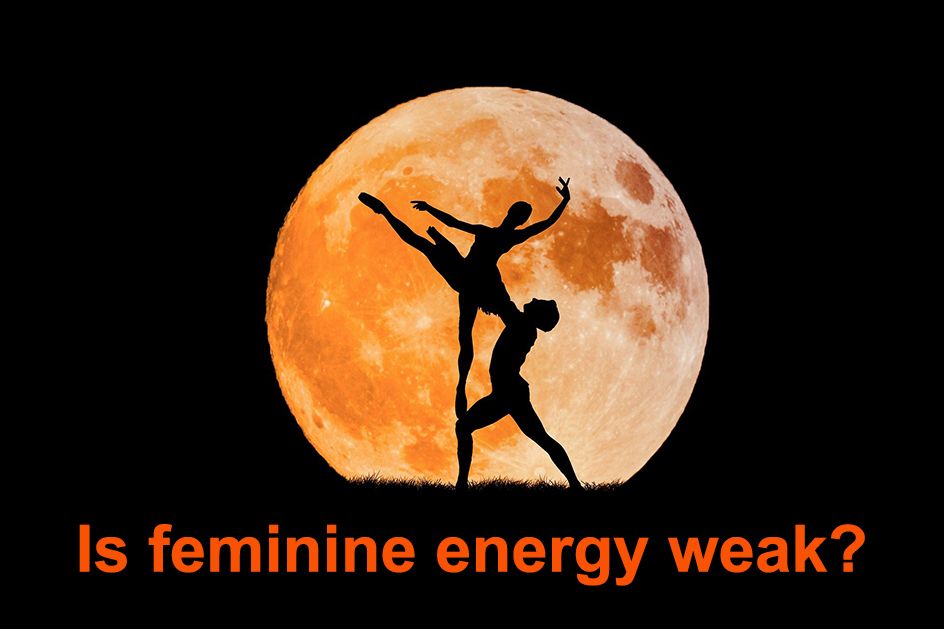 In the last few weeks this question has been popping up in many ways for many friends and clients to be examined, and I believe, removed from our collective consciousness.
So why is there this underlying belief that feminine energy is weak?
It is actually quite simple. We have been completely misled. It comes from the patriarchal system which wants control, specifically over the creativity and power of the feminine.
Now be completely clear, both men and women have feminine energy.
When you are soul having a human experience in a female body that current of feminine energy is easier to tap into and, more importantly, aspects of it are actively encouraged and reinforced through expression in most modern-day societies, such as empathy and compassion.
And the opposite holds true of souls having their human experience in a male body; the feminine energy in men is repressed heavily in many cultures and certain masculine energy aspects emphasised, like physical strength, logic and judgement.
But why would the patriarchy want to suppress feminine energy in both men and women?
We suppress and control things we are afraid of, that we don’t understand, that we fear may control us. Sadly, throughout history masculine energy has been misused, to control feminine energy, because of the power of feminine energy when fully integrated and whole, not because it is weak.
I want you to breathe in and take a moment to remember who mother nature really is.
She is not only the source and support of every life on this planet, nourishing everything that swims, crawls, walks or fly's, every day, in every way they need…
SHE IS FEROCIOUS AND POWERFUL BEYOND MEASURE.
She has a fire raging at her core so fearsome rocks become molten. Think of the devastation of her tsunamis, the heat and magnitude of her volcanic eruptions, the way her earthquakes can turn our cities on their heads in a matter of seconds.
AND SHE CAN ENDURE AND SUSTAIN EVERYTHING SHE DOES INDEFINITELY.
Make no mistake, feminine energy is powerful as fuck.
And more over, it is magical and far, far beyond intellectual understanding.
Female bodies have the ability to grow life. They carry a cosmic portal that allows souls to enter the world.
There is nothing more sacred and powerful than that.
From a yogic perspective, the reason many of the practices were developed, and originally only practiced by men, was because the ancient texts teach that male bodies have one source of Agni or fire within, associated with the transformation of digestion.
Female bodies have two, the fire of digestion and the fire in the womb that allows female bodies to create life. So, physical yoga practices were originally a practice to support men to reach the same energetic power of transformation women already naturally hold.
It does not surprise me that as women have adopted yogic practices and made them their own through understanding how they work in a female body, the divine feminine has begun to rise in the collective around our planet.
It is that aspect of the feminine, the creator, that the patriarchy has repressed.
Think of our major religions, in which God is male. Think of all the witch trials, women not having the vote, think of how we value artists, poets, musicians, think about how the role of parents and care giving has been made to seem less important than those roles played out in the boardrooms.
AND WHAT BETTER WAY TO DO THIS THAN TO LABEL THE FEMININE SUPERPOWER, THAT OF UNDERSTANDING AND USING EMOTION AND INTUITION, AS WEAK.
And because so many of us have been asleep, both men and women, we haven’t realised how this shaming of emotional expression, of female physical form and divine sexuality has kept us all from the truth.
In a tantric sense, the masculine plays the dual roles of supporting and filling. The feminine is the receiver and creator.
It takes strength to support and project your magic into the world as men do. And it takes strength to hold space, to be able to hold a void in patience while something new is conceived and grown.
And there is nothing new created in the world if both energies do not play their roles. Only destruction.
It is both the responsibility of both men and women to move out of this perspective, to which we have been led. The one in which the type of body you are in defines your power, and feminine energy is negated as weak.
I invite you today, however you identify, to embrace the experience of your emotions, to express them fully, to follow your intuition.
Receive, reflect, ground, empathise, show your compassion, magnetise what you desire, be vulnerable, authentic, trust and be open because these are all your possibilities, all your superpowers, when you are using your divine feminine power.
Let us challenge a system that wants us to believe only the mind has power. Of course, a patriarchal system wants us to believe that…. because minds can be controlled.
It is time we were all free.
And while you choose to stay in the trap, you are not living in your full power. You are not fully embracing the huge magnitude of experience available to you when you reject your feminine energy as weak.
You are missing out on the beauty that arrives in the awareness that, it is only when, each man is whole within himself, comfortable with both his current of masculine and feminine energy and each woman is whole within herself in the same way, we can truly come together, and be the divine creators we are at our core, through our unified loving human experience.
And you realise that WE are all powerful in a way we have not yet fully conceived as a collective.
Let me know what you feel, if this resonates or triggers anything within you.
With love,
Helen xxx